You are here: Home / Blog / What Does Octopus Taste Like? The Best Tasting Dish Ever!

Do you have a perception that octopus is wild? It may not be common for you but many cultures consider this a special delicacy.

Do not be surprised but many delicious recipes are waiting for you to taste. Let’s find out what does octopus tastes like.

It is better to actually taste it yourself rather than listening to other people’s experience. However, before you do, we are here to explain to you a little bit of what you are going to go through.

Grilled octopus with olives recipe. In Greek, they are being grilled in open flames.

Wait, you may want to know: How to Cook Frozen Tamales in Several Ways?

You may imagine that octopus tastes like hard rubber, slimy and plain. This may be true to many who were unfortunate enough to taste an octopus that was not prepared in the proper way. Yet, if you learn the technique on how to cook it the right method, it is tender and tasty in its own special way.

Octopus has a light flavor that is comparable to lobster, pork, and chicken. Although it is mostly being mistakenly confused as squid, they are completely different. While octopus meat is tenderer and juicier than squid, squid, on the other hand, is smoother.

Octopus originally does not have a distinguishing taste. It picks up whatever taste you flavor them as you are cooking. Ordering an octopus dish in any restaurant is costly. It is a fact that it is hard to cook just right and is being considered a rare delicacy.

What is the Secret in Making a Delicious Octopus Recipe?

We have mentioned that octopus taste like a lobster, chicken and even pork. There must be a technique on how to cook it to taste as tender, juicy and tasty as it can be.

Many claims that octopus is not easy to prepare and is a constant struggle especially if you do not have the proper kitchen gadgets to cook it.

Here are the tips that will help you in ​making a delicious octopus dish:

The Best Tasting Octopus Recipe Ever

As I have searched for the best octopus recipes, this “Red Wine-Braised Baby Octopus with Black Olives” came out as one of the best tastings. Here is a video showing how to make it.

In this recipe, the octopus is being boiled in a thick, hearty sauce that is pleasing with a flavorful, mouth-filling red wine.

Practice makes perfect! If you are really into cooking an octopus, you will learn the techniques in no time at all. The more recipe you make with octopus, the more flavorful it is for you.

What does octopus taste like? Well, with you cooking it more often at home, your opinion will be highly regarded. I bet you can even share with NutrientBowl some of your own cooking techniques! 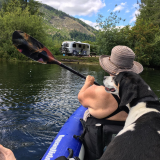